Home » Blog » Why are Christians all of a sudden so divided?

Why are Christians all of a sudden so divided?

Reflect on this assessment by Timothy Dalrymple, President and CEO of Christianity Today:

“One group within American evangelicalism believes that our religious freedoms have never been more firmly anchored. another that they were never at greater risk. One group believes that racism is still systemic in American society; Another reason is that "systemic racism" is a progressive program to redistribute wealth and power to angry radicals. One deals more with the Capitol Rebellion; another with the riots that followed the assassination of George Floyd. The Trump presidency is believed to have generationally damaged Christian witness; another that it was enormously beneficial. The former president is believed to have attempted a coup; another that the Democrats stole the election. It is believed that masks and vaccines are signs of Christian love; another, that the rejection of them is a sign of Christian courage. "

It is, of course, an apt description of what he calls "the fragmentation of the evangelical soul". But why is it so pronounced? He writes about two dynamics: the plausibility curve and the information curve.

“The curve from one end of the bowl to the other represents the range of claims a person believes are believable. Let's call it a plausibility curve. Claims that fall in the middle of the curve are felt to be the most plausible. They require little evidence or argument before a person will consent to the belief. Assertions that fall near the edges become increasingly implausible as they deviate from the center and increasingly require more persuasion. Claims that are completely off the plausibility curve are outside of the range a person could believe at any given point in time, and there won't be a sufficient amount of evidence or logic. "

This results in the plausibility of a certain claim: "How well does it fit what an individual experiences, already believes and wants to believe." It is obvious that we need more convincing work to accept claims that we do not want to believe than the ones we do. It also goes without saying that personal plausibility curves can change with time and circumstances, and what I find plausible, someone else may find unimaginable.

This is where the information curve comes into play, writes Dalrymple.

“Imagine a mirror-image bowl over the plausibility curve. This is the information curve that reflects the individual's external sources of information about the world, e.g. B. Communities, authorities and media. These sources in the middle of the information curve are considered to be the most trustworthy. Claims made from these sources are accepted almost without question. Sources of information at the far ends of the bowl are considered less trustworthy, so their claims will be scrutinized. Sources outside the curve are so unreliable, at least for this person, that their claims are immediately dismissed. " 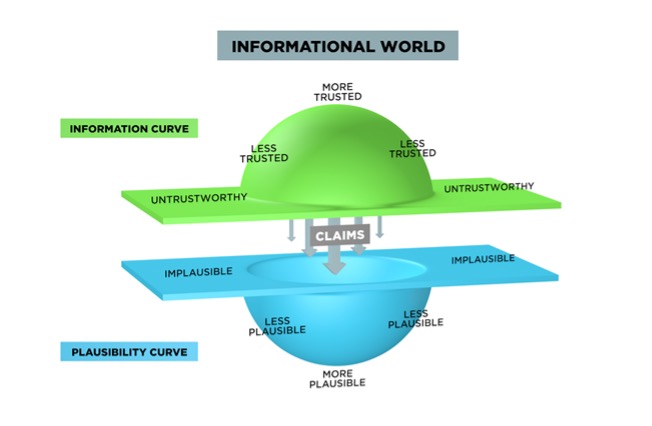 And it is what caused the fragmentation of the evangelical soul. Again Dalrymple:

“This feeling of togetherness became increasingly tense as groups that were not previously identified as evangelical were merged and the“ evangelical ”category was defined less theologically than social, cultural and political. This broader evangelical movement is now divided into separate communities that still have some moral and theological obligations in common, but differ dramatically in their sources of information and their broader view of the world. Their information worlds hardly overlap. They can only discuss a narrow range of topics if they don't want to get into painful and angry disagreements. "

So what can you do? We need to "move the information curves towards a common center". Then the plausibility curve follows. And information comes from three sources: media, government and community. In short, we need to: 1] make our media consumption reasonable; 2] restore trustworthy leadership; and 3] instead of withdrawing into "communities of common hatred, the church should offer a fellowship of common love".

There's a lot more to the article – it's well worth taking the time to read it in full. But fewer words are more needed and truer than those with which he concludes:

“Maybe we can start building bridges between our information worlds. Perhaps we can nurture a healthy media ecosystem that offers a balanced view of the world and generous conversation about it. Perhaps we can restore a leadership culture defined by humility over fame and integrity over influence. Perhaps we can invite those who have found fake fellowship in their political tribes to rediscover a richer and more robust fellowship in Christ. All of these things will be essential to restore a common understanding of the world created by God and the importance of following Christ in it. "

James Emery White is the founding and senior pastor of the Mecklenburg Community Church in Charlotte, NC, and an associate professor of theology and culture at Gordon-Conwell Theological Seminary, where he also served as fourth president. His latest book After “I Believe” is now available on Amazon or your favorite bookseller. To get a free subscription to the Church & Culture blog, visit ChurchAndCulture.org, where you can view previous blogs in our archives and read the latest church and culture news from around the world. Follow Dr. White on Twitter, Facebook and Instagram @JamesEmeryWhite.

Books of the Bible

Relationship Goals: How to Win at Dating, Marriage, and Sex

On the Way with Jesus: Cycle A Sermons for Lent and Easter Based on the Gospel Texts