According to a survey of more than 38,000 people in 34 countries on 6 continents, the personal meaning of faith is increasing in large parts of the world.

In an analysis released this week, the Pew Research Center found that 61 percent of those surveyed by the Global Attitudes Survey last year agreed that "God plays an important role in their lives". Similarly, 62 percent said religion was very or something important in their lives. (Note: percentages are medians based on the 34 countries.)

The proportion of people who say that religion is "very important" in their lives is increasing in 19 countries and almost everywhere in the global south, including Argentina, Brazil, India, Indonesia, Kenya, Nigeria and the Philippines.

Religiousness is particularly strong in the Middle East. Since 2007, Lebanon has seen a 20 percentage point increase in residents who say religion is "very important" in their lives, from 50 to 70 percent. In 2007, barely a quarter of Israel's population in Israel stated that religion was “very important”. Last year, 39 percent agreed.

For example, Germans have grown since 2002 who place a high value on religion, as do those who do not attach any importance to it. Greeks and Dutch show the same subtle departure from moderate views on religion towards the two Poles.

Of the 34 countries examined, the lukewarm outlook on religion has decreased in 24 countries in favor of a stronger view of the importance of religion ("very" or "not at all"). The proportions remained the same in 4 countries, and in 6 countries more people chose the middle position of religion as "something" or "not too" important than in previous years.

Since the fall of the USSR, religiosity has seen a major boom in several Soviet bloc countries, particularly Russia and Bulgaria. This is accompanied by an increase in the rate at which people say that God plays an important role in their personal lives. The proportion of Russians and Ukrainians who say that God is personally important to them has increased by around 10 percentage points in the past three decades.

And while those in South Asia, Africa, the Middle East and South America say much more that religion is important in their lives, almost half of Europeans still say the same thing.

Religiosity, however, is not necessarily the same as active orthodox belief. Pew research previously found that most Europeans (71%) identify themselves as Christians and that majorities in Western Europe support paying church taxes, but far less believe in God, as described in the Bible, or hold on to historic Christian social positions .

Likewise, numerous populist movements in Europe appeal to Christianity as a uniting force, but "these movements are primarily interested in defending Christianity as a cultural heritage (and as a bulwark against Muslim immigration and influence), not as a matter of living faith "did he write Thomas Albert Howard in his CT review of Is Europe Christian? by Olivier Roy.

The United States is something of an outlier. A full 7 in 10 Americans say that God plays an important role in their lives. A similar segment says religion is important to them, with almost half (47%) saying that it is "very important", while 16 percent say that it is "not important at all".

American Protestants say slightly more often than American Catholics that God plays an important role in their lives (95% vs. 84%). About 3 in 10 non-religious Americans say the same (29%). 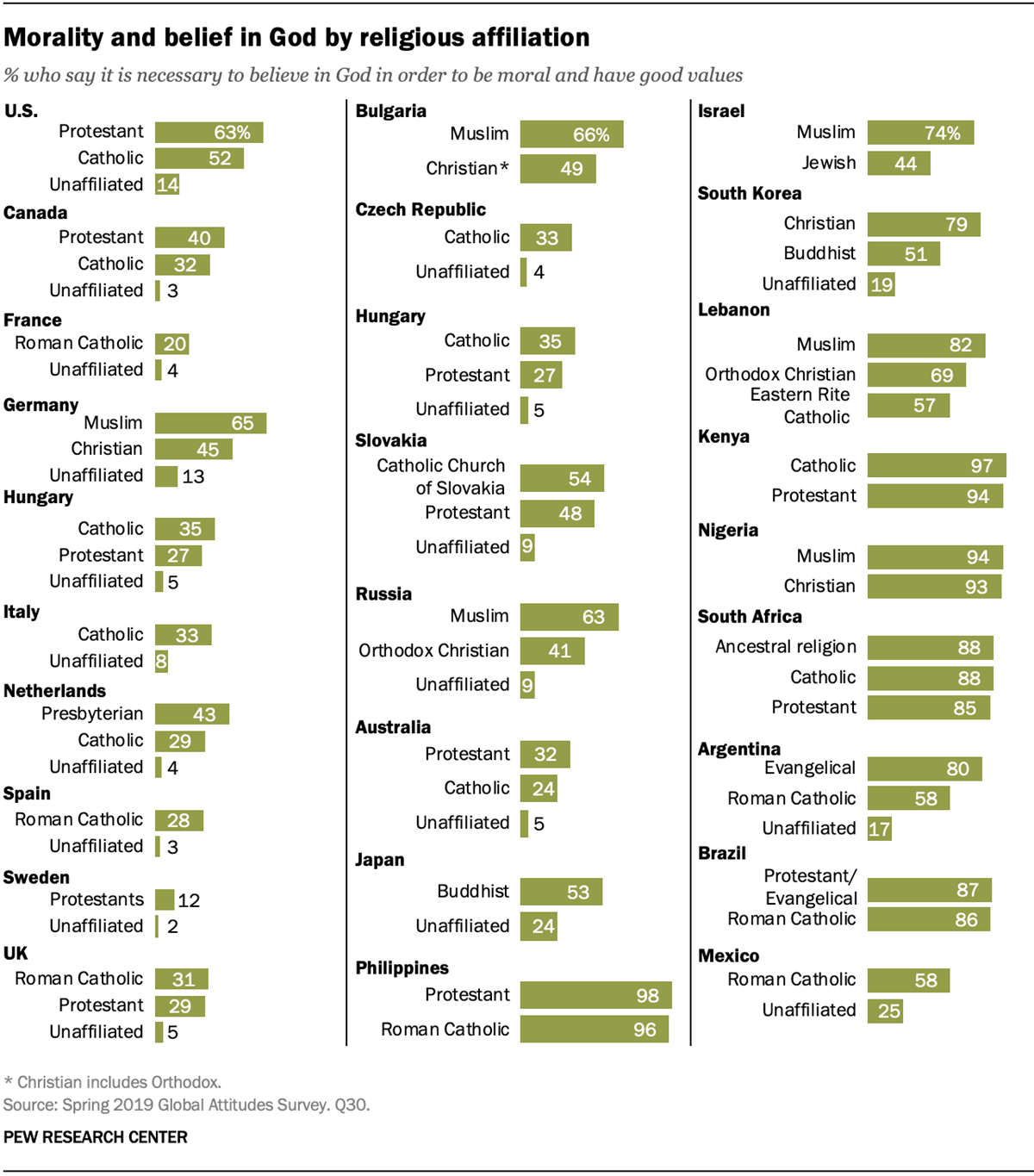 These results are consistent with another Pew report from last year that found that most people around the world want religion to become more important in society. Nearly three times as many among Americans would say that religion that is gaining importance in the country would be a positive change (51%) compared to those who said it would be a negative change (18%).

In this week's analysis, about half of respondents in the 34 nations agreed that prayer plays an important role in their lives (53%), and about half said that belief in God "is necessary to be moral." be and have good values ​​”(45)%). 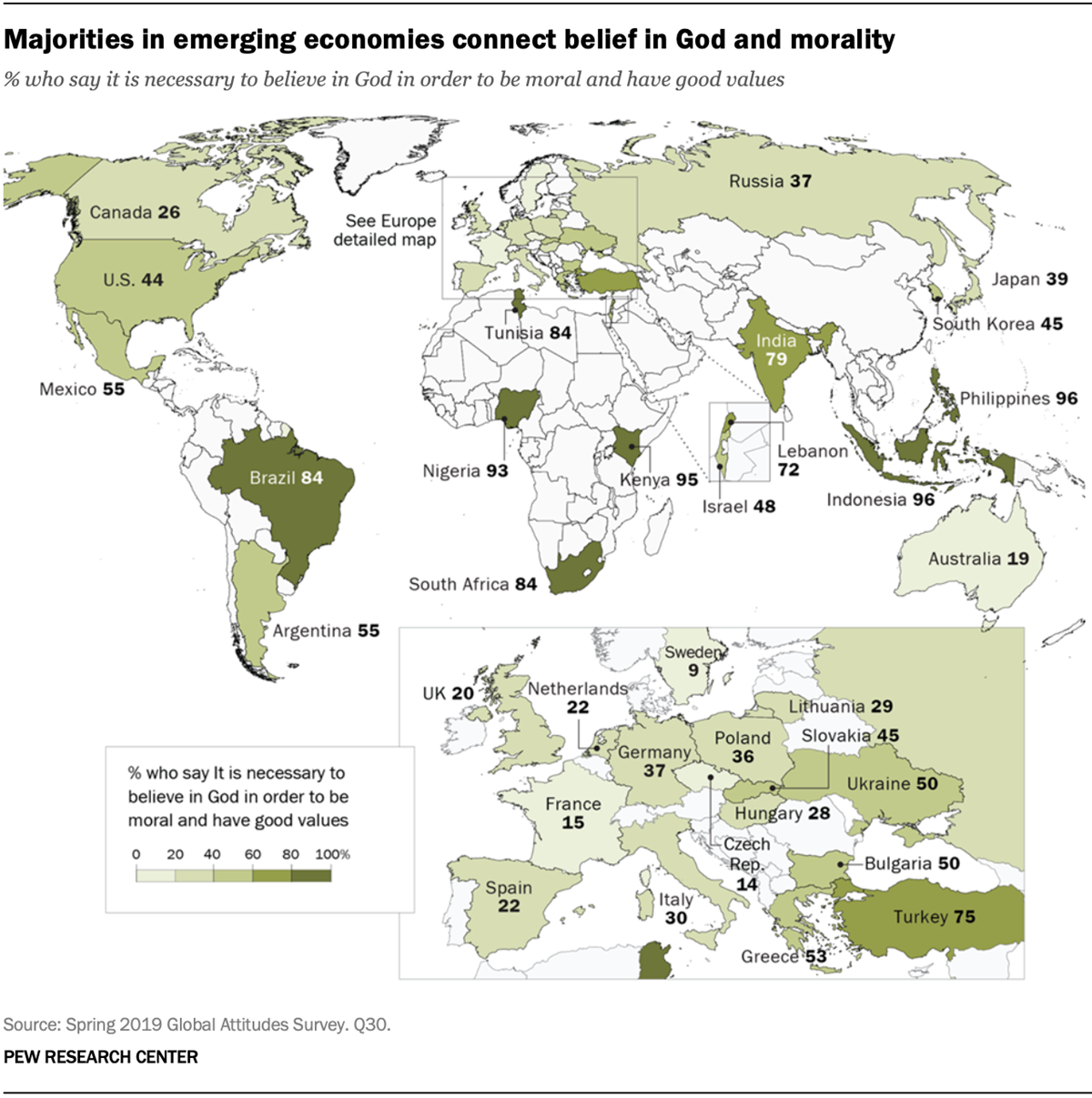 Last year, 44 percent of Americans said that belief in God was a prerequisite for morality – 14 percentage points less than in 2002 and the largest decline among all nations in Pew's survey. The biggest increases: Bulgaria from 33 to 50 percent; Russia rose from 26 to 37 percent; and Japan from 29 percent to 39 percent.

More than 6 in 10 American Protestants associate belief in God with good values, while about half of American Catholics and 14 percent of non-religious Americans say the same.

Western and Eastern Europe have smaller proportions that say the same thing: 22 percent and 33 percent, respectively.

People in Southeast Asian and African countries are the most likely to say that belief in God is necessary to be moral and have good values. More than 9 in 10 in Indonesia, the Philippines, Kenya and Nigeria agree, while more than 8 in 10 in South Africa, Tunisia and Brazil say the same.

The researchers found that the percentage that says belief in God is necessary for morality correlates quite strongly with GDP per capita. In particular, those living in more affluent countries with more advanced economies associate belief in God less with good morals than those in emerging and developing countries.

Again, the US is an outlier with a high GDP per capita and a relatively high rate of those who say that belief in God is necessary for morality.

Even within countries, people with higher incomes generally say less that it is necessary to believe in God to be moral. Of the 34 countries examined, the gap is greatest in the United States, where those with "lower incomes" say that morality requires a belief in God that is 24 percentage points higher than those with "higher incomes".

Pew also noted that "people in emerging markets more than twice as often as people in advanced economies agree that prayer is an important part of everyday life."

Clowning Round by Wanda Brunstetter