The church, protest & stand with

The church, protest & stand with

Editor's note: We are in a unique moment: there is new energy regarding racial justice and perhaps more than at any other point in history, many white Americans are protesting with people of color.

In a recent episode of the Unlocking Us podcast, Brené Brown and Austin Channing Brown discussed our human desire to have a guide or checklist for this work. We can concentrate like this being correct in our terminology and action that we don't do it right. And what are we trying to do right? As Austin Channing Brown says, "Be better people for other people."

This reflection by Rev. Drew VanDyke Colby is honest and vulnerable. It is a person who tries to get it right in one night – to be the Church that appears and stands with the oppressed. And it testifies to God's work amidst uncertainty.

Emerge as a church in the middle of the protest: a reflection

Late on Saturday evening, May 30th, I received texts from some members of the Church who alerted me to protests that were getting serious in our city. On Sunday morning it was clear that the night ended with violence, vandalism and looting. That afternoon I received texts from black colleagues asking me and others to come up for another protest. I didn't want to go, but I was forced to go, just for a bit.

I came to the sound of a pastor on a PA. "Everyone kneels please. Take a knee and listen. "He said," To everyone here who wants a peaceful protest tonight, who wants a meaningful dialogue between demonstrators and police to take place here. If you want to support that, I need you all night and you have to get us something to eat. "

I was there in my mask, baseball cap and stole, along with a few other clergymen. I came to pray, but it was clear that it was a protest. And I didn't know what to do.

"We need people who stay long and stay in the middle of the protest," said the pastor of the PA. “We need people who go over the edge and keep people off the street. They have to spread, participate and de-escalate. "

I wanted to work for peace, but mostly I just felt uncomfortable and out of place. I wondered what to do here. It turned out to be a prayer and then the prayer was answered. I have an idea.

I remembered that on Coronatide's first Sunday I jokingly placed a huge bottle of hand sanitizer on a small table in the back of the sanctuary where other churches have a baptismal font or holy water. I drove to church and grabbed the bottle, then drove to the grocery and got crackers, cookies, and fries. I attached a church name tag to my stole and returned to protest.

The crowd was bigger and louder now. There was shouting on the street and into the microphone. The demonstrators looked at the few police officers who had come that night to receive the wrath of a burning people. It was volatile. It felt dangerous.

"Hand sanitizer? Crackers? Cookies?" I started my rounds. "Do you need something to eat? Do you want to be washed? "I think maybe the most disarming thing about me was how stupid I looked. Imagine this stupid white guy stumbling over his stole and offering chips and free splashes to people trying to change the world. 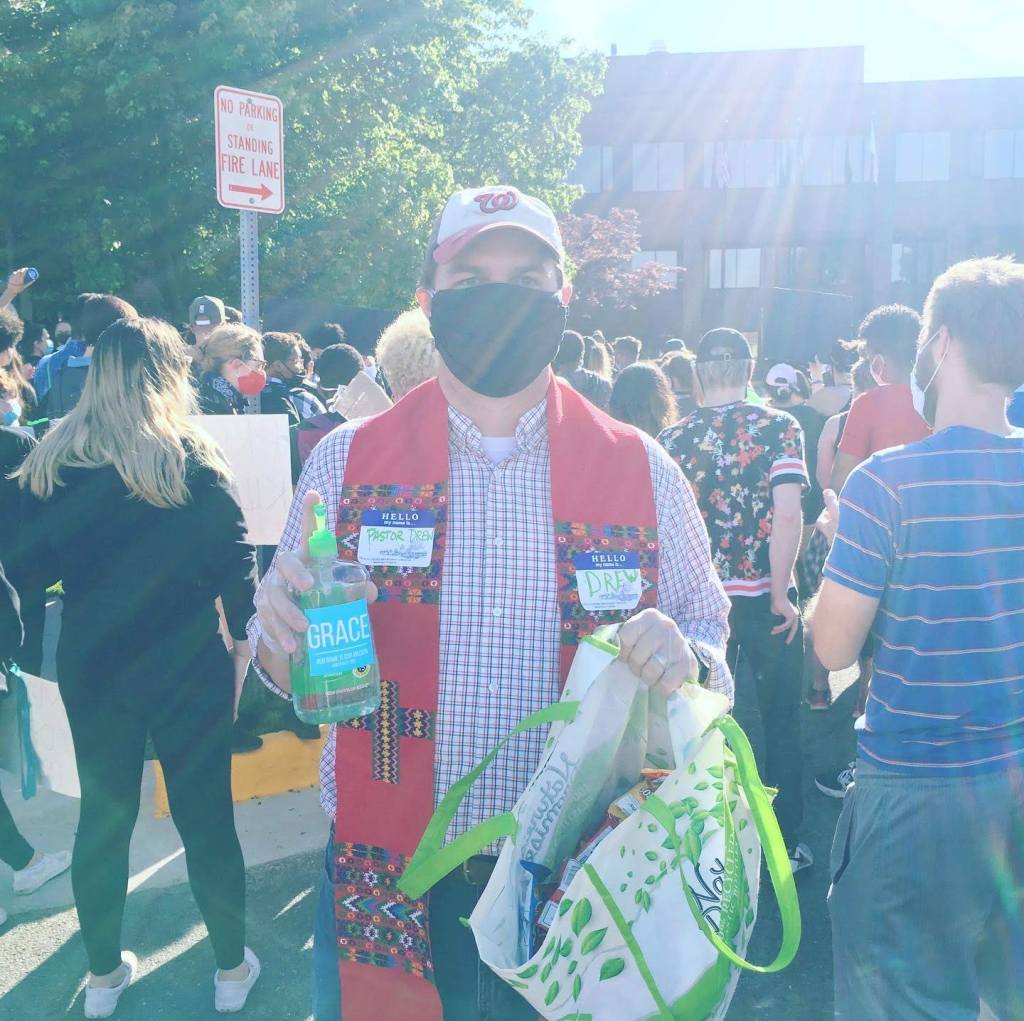 Still, person by person, whether protesting or police, when they saw this bottle, they paused and presented their palms and said, "Yes, please."

I could go anywhere with this bottle of hand sanitizer. I went along the perimeter, then the interior. I have offered it to people of all ages and colors. Even at the forefront of the protest, and person by person put down their sign and said, "Yes, please, can I have some?"

I'm a softie deep inside, so I started tearing. Offer crackers and hand disinfectants? Food and purification in the name of God? It was closest to the baptism and fellowship that I had been a pastor for months. I had missed it so much.

I shouldn't be shocked, but I was repeated when I intercepted someone who seemed threatening as soon as I offered these elements, they stopped and said, "Yes, please. Thank you, ”and my perception of them changed immediately. Whatever I felt was a threat was transformed with the sound of a splash. And then I noticed it, I did this as an attempt to de-escalate it, but in this little exchange, I was the one who was de-escalated. The ones I identified as a threat when they showed me their palms, I saw them as human beings, even as Christ.

In Romans 12, Paul calls this kind of moment the "renewal of your mind". I think what I was shown at this moment in this protest was a look at what the Holy Spirit is trying to do. We are invited by the spirit of protest and pain to open ourselves to the renewal of our spirit and conversion. I pray that it will continue to happen to me.

Drew briefly considered his experience during the protest on FaceBook Live. You can see the video here.

Rev. Drew VanDyke Colby is a United Methodist pastor who serves in Manassas, VA. Drew grew up in Richmond, VA and is very interested in the intersection of racism, sin and the gospel.